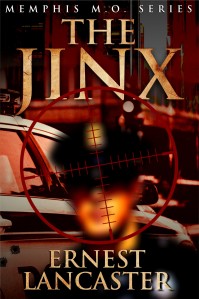 Synopsis: Disaster strikes and innocents die as police sniper Rick Munro is plagued by a first-call jinx. As his career takes off, he must overcome his rookie mistakes, and keep his team members safe.

When Munro returns to TACT as a newly promoted lieutenant, the jinx torments him still. He must contend with team members’ rival agendas around every turn. Munro finds himself in a battle he can’t escape as corruption and death unfold around him.

Who can he trust? Will Munro break the streak or will it destroy everything he believes in?

My Review: I liked this book.   This book is part of a series and this is book one in the series.

The plot evolves rapidly, and its action packed with lots going on to keep the reading wanting to know what happens next.  The book is well written.  It is heavily based on dialogue and for this type of plot, the heavy dialogue worked well in moving the story along, and keeping things heated and interesting.

My favourite characters are Rick Munro and Loretta. I liked these two best as I connected with them the most.    I especially liked Loretta’s story.  She has a darker past, but throughout the book, you see that she is trying to change her life around, despite still ending up in situations that implicate her.

I think that Loretta’s story teaches a good lesson, in that it is important to give others second changes, and to not judge others by their pasts.

I also really liked Jan’s character, and I kept rooting for her to make it to the TACT team to be the first women on that team!  Go Jan!

Closing Thoughts: Overall, I enjoyed the book.  I give it a 3.5 star rating out of 5 stars.  The plot was interesting, and well constructed, its fast paced, and despite the lack of connection to some characters, I enjoyed the read.

I recommend this book and think you will love this book if you enjoy reading books about police officers, and the daily struggles they go through, and of course, the good cop versus bad cop concept!

I am looking forward to seeing where the next book takes its reader.

Ernest Lancaster retired from the Memphis Police Department as a captain after serving as a cop for thirty-three years.

In the early seventies Lancaster spent two years walking a night beat in downtown Memphis, when The Peabody and Beale Street lay boarded up and crumbling and the center city became a dystopian ghost town after dark. He patrolled in ward cars, trooped for three days through a sea of pilgrims to Elvis’s funeral, edited the Memphis Police Association’s newspaper and acted as the association’s vice-president. For twenty-six years he held positions on the TACT Squad.

Lancaster now resides with his wife and Yorkie in the Smoky Mountains, where they love to hike and camp.

One thought on “Blog Tour and Book Review: The Jinx”